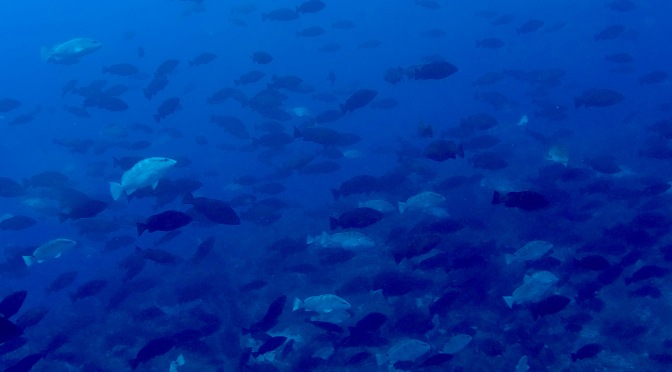 Nassau grouper (Epinephelus striatus) are endangered predators found on coral reefs in the Caribbean Sea. Around the full moon at the beginning of the year, they gather in thousands to reproduce at a special site on the West end of Little Cayman, Cayman Islands. The Cayman Islands used to be home to five Nassau grouper spawning sites. However, four of these are now dormant or depleted.

The Cayman Islands, Department of the Environment (DoE) work in collaboration with Reef Environmental Education Foundation (REEF), Scripps Oceanography Institute and Oregon State University to gather data on this aggregation and are responsible for the management and protection of this healthy site. Without their dedication and hard work over the past decade, this spawning aggregation would probably not exist, like many other historic sites in the Caribbean that have been ‘fished to extinction’.

What has been learned so far?

During day dives, fish counts are conducted to establish the population of Nassau groupers on the Spawning Aggregation. Lasers are used to assess fish size classes to determine how much of the population are adults or juveniles and what proportion are reproductively active. Hydrophones funded by NOAA International Coral Reef Conservation Program are deployed to record fish sounds during mating and Floy tags are inserted into the fish using spears.

During the spawning, larvae from Nassau and Tiger groupers are collected by swimming up to a ‘spawning burst’ and opening a zip lock bag allowing water and specimens to rush inside. Samples are taken to the Central Caribbean Marine Institute (CCMI) where Alli Candelmo and her team of scientists study the progressive stages of larval growth.

On the night of peak spawning, satellite drifters are released to follow the current and therefore follow the newly released larvae. In doing this, the team hope to establish whether this aggregation repopulates reefs in the Cayman Islands or further afield. This research is funded by the Disney Worldwide Conservation Program. The boat follows the drifters towing the ‘The Acrobat‘ which is able to control depth and take microscopic pictures of the eggs and plankton in the water column. This microscopic camera was developed by Scripps Oceanography Institute and was attached to a plankton net last year for the same purposes.

When the Nassau groupers begin to disappear from the aggregation, approximately after 4 nights of intense spawning, other species of grouper tend to take over this spawning site. This year, Yellowfin grouper were collected using a hand line and brought onto the boat to for surgery. This involves taking length measurements, fin clips, blood samples and inserting a PIT tag so the fish can be followed for  4 years. Like much of the research occurring on this aggregation, this has never been done before and should lead to exciting findings.

Science communication is incredibly important and REEF ensure to include education talks throughout the 2 week period of the Grouper Moon project. Below is an education dive on Bloody Bay Wall where children from local schools in the Cayman Islands can get involved and ask questions about the project.

Last and certainly not least! Sir Richard Branson joined us this year on the Nassau Grouper Spawning Aggregation in the hope to learn previous techniques used by REEF and the DoE to establish spawning aggregations in the British Virgin Islands.

A big thank you to the DoE and REEF for involving me in this incredible research!